The chair of the Ottawa Chamber of Commerce, Marie Boivin, is one of 12 individuals being sanctioned by the U.S. Department of the Treasury following an investigation into mail fraud.

In a report released Sept. 22, the department’s office of foreign assets control says it has designated the Vancouver-based company PacNet Group “a significant trans-national criminal organization” involved in processing, and profiting from, payments linked to mail scams.

Boivin is the director of Accu-Rate, an Ottawa-based foreign exchange company and an affiliate of PacNet.

In the report, the department alleges Accu-Rate “facilitates illicit cash transactions” on behalf of its parent company.

None of the allegations has been proven in court. Individuals can appeal a sanction imposed on them by the department.

CBC made several requests Tuesday morning to interview Boivin. She did not respond to our requests.

Accu-Rate lists its corporate office at 2573 Carling Ave. It also has a currency exchange booth at the World Exchange Plaza in downtown Ottawa.

In a typical scenario, a potential victim receives an email or letter promising a large cash prize in exchange for a payment. It’s a scam, but many people fall for it.

The victim is instructed to send money to a third-party processor — in this case PacNet, according to the department. PacNet then processes the payment, but not before pocketing a commission.

According to the department’s report, PacNet has knowingly allowed scammers to use its payment processing service to collect money from victims in U.S.

Worse, said the department, PacNet’s processes “helped obscure the nature and prevent the detection of such fraudulent schemes.”

While not providing specific allegations against Boivin, the U.S. Department of the Treasury lists her as one of 12 individuals it has sanctioned. 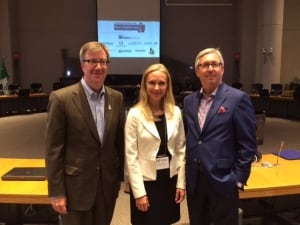 Marie Boivin, pictured here with Ottawa Mayor Jim Watson (left) and Ottawa Chamber of Commerce vice-chair Ian Sherman (right) in June 2016, when she became chair of the chamber’s board. (Twitter)

It’s alleged that in some cases the individuals “provided specific guidance as to how to hide the illicit nature of PacNet’s operations or deceive the financial institutions with which PacNet interacts,” said the department.

The sanctions mean any property under U.S. jurisdiction that those named own or have an interest in is blocked, and Americans are prohibited from participating in transactions with those individuals.

No one from the Ottawa Chamber of Commerce responded to CBC’s request for an interview Tuesday morning.

Boivin was named chair of the chamber’s board of directors on June 23. She’s been a member of the board since 2010, according to her biography on the chamber’s website.

The same bio says Boivin is a passionate advocate for her community’s business posterity, and has two decades of experience in the foreign exchange and banking relations industry.

The department’s allegations against PacNet include specific accusations of processes used by the company to avoid detection.

In a statement posted on its website, PacNet said it’s an international payment processing company, and it absolutely and categorically rejects the allegations made against it regarding its processing for direct mail campaigns.

Looking for a private investigator in Ottawa, Please contact us today!